Fun, on a truly massive scale

Off the Beaten Path

Before becoming his producer, Jon Landau wrote “I saw rock and roll’s future and its name is Bruce Springsteen.” A similar revelation could be after playing Mammoth Dunes the first time. Its scale is just massive, likely far beyond anything you’ve played before. That scale makes the course eminently playable for all – the name of the game is not about hitting the fairway, or the highly receptive greens. It’s about being in the right place in the fairway and on the greens. Instead of penally doling out punishment to mishits, Mammoth Dunes merely gives you a lower odds next shot. In many ways, this harkens back to links like St. Andrews. But for a game that’s been obsessed with “protecting par”, the style being developed at Mammoth Dunes, and a few other places, is a welcome development that will make the game far more enjoyable for all, low and high handicaps alike. And that it’s being pioneered by such a massively enjoyable course just means it’ll soon have more acolytes. Which is a good thing for all, I say.

Mammoth Dunes…is the most fun golf course I’ve ever played.

Plugged In Golf
It’s a big course (playing to a par of 73 with five long par five holes) that’s built on a massive scale with an overall design philosophy of bringing fun back to playing the game. Fairways are unfeasibly wide, some measuring as much as 120 yards across, offering multiple paths from tee to green on many of the holes. Top 100 Golf Courses
Everyone likes Mammoth Dunes. It’s hard not to fall for the course at first sight. It is big, laid across stunning terrain and just plain cool. Players come off the 18th green with smiles on their faces having thoroughly enjoyed themselves, often beaming with the pride of posting their best number in years. We don’t blame them. We had the same reaction. The Fried Egg

Golf Magazine
The overall scale of the property is also grander, with several holes built along, on, and over an 80-foot-tall ridgeline that serves as the defining topographical feature of the course. Links Magazine
[This] meandering layout [has] enormous fairways, big accessible greens and visually-unique hillsides of exposed sand, “mammoth dunes” that became the course moniker. Golf Digest
It is fairly obvious that there was one overarching mission when Sand Valley ownership and David McLay Kidd teamed up to bring the world Mammoth Dunes – let’s take this beautiful, native sand dune terrain and create the most fun golf course anyone will ever play. Mission accomplished! Golficity
The idea of building courses that are more player friendly than punishing is nothing new, and architects have talked from the beginning of time about the desire to challenge great players while also keeping the game fun for the average golfer. Mammoth Dunes attempts to take this concept to its ultimate expression. Feed the Ball

Mammoth Dunes is huge. It occupies 500 acres of land, and has 107 acres of maintained grass. The dune ridge which forms the dominant feature of the property is close on 100 feet high (this explains why the course’s footprint is so large). And, visually, it is simply off the charts.

Golf Course Architecture
For now, though, this focus is on Mammoth Dunes which — I’m comfortable in declaring — the most fun golf course I’ve ever played. And that’s saying a lot. There are a lot of fun courses out there. Len Ziehm on Golf
If “fun” was a favored descriptor, it was closely followed by “gargantuan” and its many synonyms, because unlike the big man who answers to Tiny or the milquetoast to Butch, this golf course was well and truly named. Golftime

Greens are large, hard but and accessible for the average golfer.

Quintessential Golf
The hole designs ooze with creativity as the natural movement in the terrain allows for a unique variety of hole shapes and some of the most memorable greens you’ll ever come across. Golf Course Gurus
The course occupies dramatic sand ridges formed by a prehistoric glacial lake, and like Gamble Sands is identified by its vast playing areas and enormous scale. Planet Golf

The course may look difficult, but most of the fairways and green sites provide options for fortunate bounces and there are plenty of spots to use the terrain to your advantage.
PJ Koenig
Mammoth Dunes…is something to behold, a brawny eclectic mix of designs that’s inspired by a renewed and re-energized original and his evolved thought process regarding golf course architecture. Links Nation

The routing is fantastic going over hill and dale while offering a few straight ahead holes as well. The fairways are wide which allow you to try a variety of routings to the hole all while keeping golf balls in your bag. The bunkering is intoxicatingly beautiful and has a great mix of naturally occurring sand blowouts along with more traditional bunkers.

The Par 5 7th hole features something you don’t see everyday…a bunker made from the remnants of an old house! Fronting the green is what remains of the cellar of a house that used to stand on the Mammoth Dunes property. This is one bunker you will want to avoid!
Kurt Chrisler
It has a very adventurous feel to it with the land feeling more rugged than Sand Valley. The fairways, greens, bunkers and changes in elevation here are massive in scale. Every hole is memorable as we found ourselves constantly in awe on every tee box. Eighteen Under Par

The par 73 course boasts wide sloping greens forcing players to aim totally away from the hole at times to be able to roll it back into close position of the pin placement.

My Avid Golfer
The views are spectacular and the course is so mammoth and spread out that it gives you this joyful, pure feeling – like you’re playing golf the way it was meant to be played. Top Travel on Points
McLay Kidd has evolved from designing imposing, difficult courses to creating ones that make the sport more fun and welcoming to average golfers—an approach put on full display at Mammoth Dunes. Robb Report

Everything is just plain huge; a giant putting green, expansive fairways, ginormous greens, and endless bunkers. The scale of this course is something to behold in person. 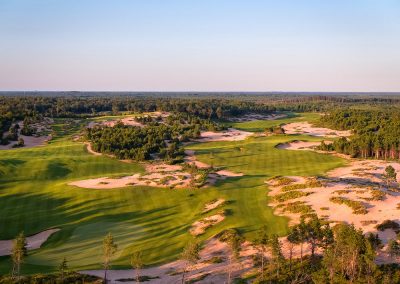 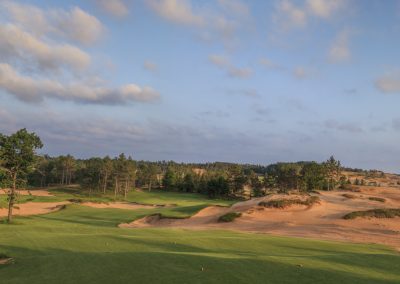 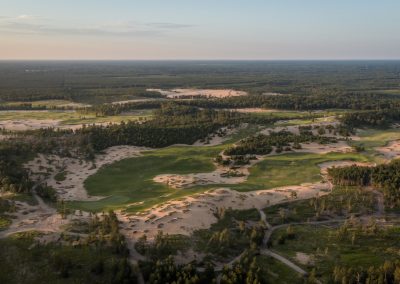 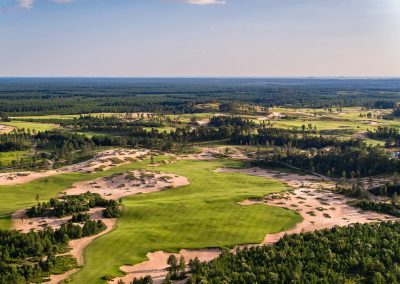 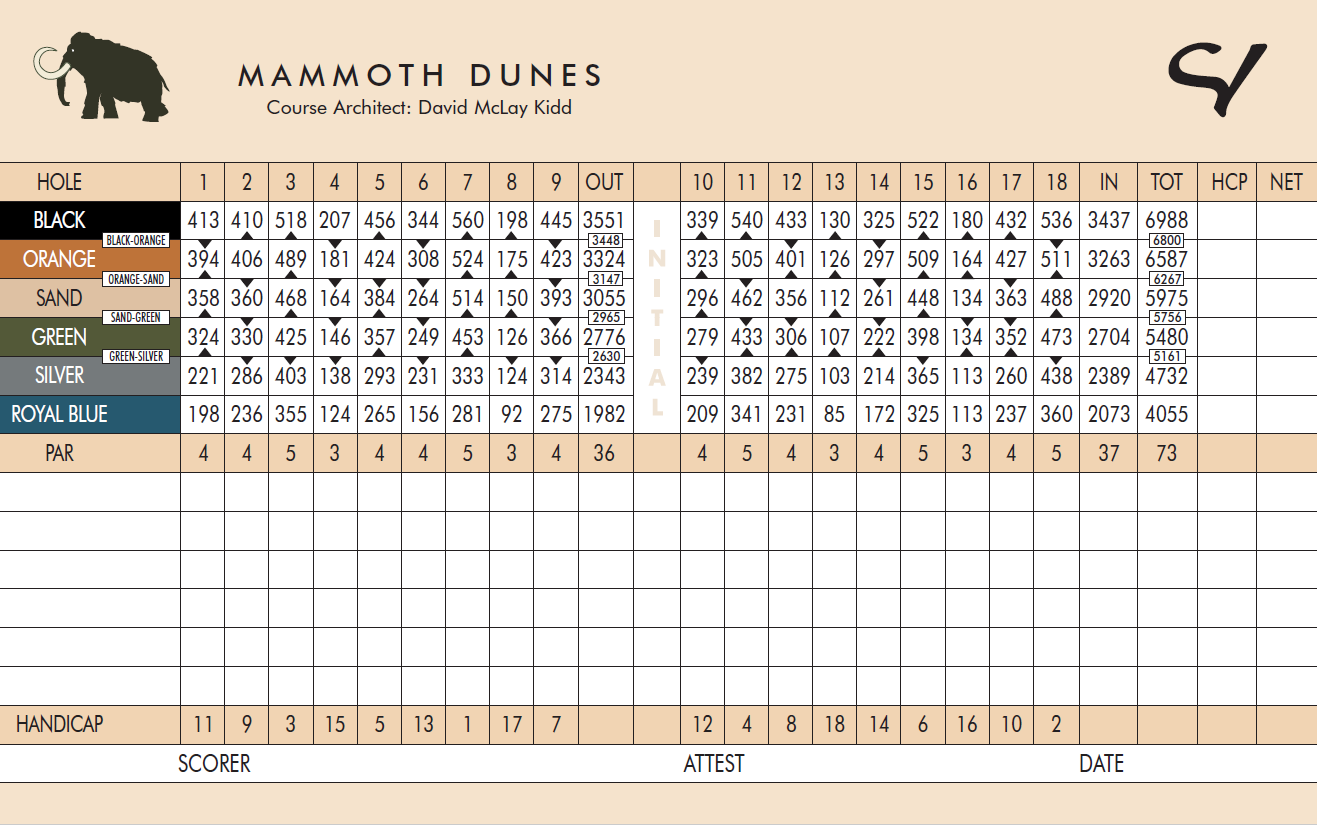 Mammoth Dunes is open from mid-April through mid-October.

Temperatures should be pleasant – consistently above 50 degrees – any time the course is open. July is the hottest month, with average highs topping 80 degrees. Rainfall is pretty consistent May through September, with April and October being a tad drier.

Any time Mammoth Dunes is open should be a good time to play. 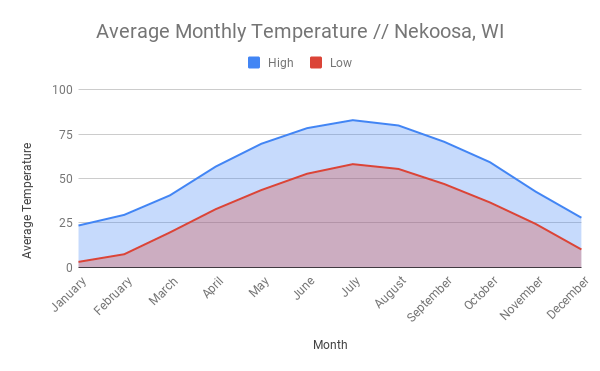 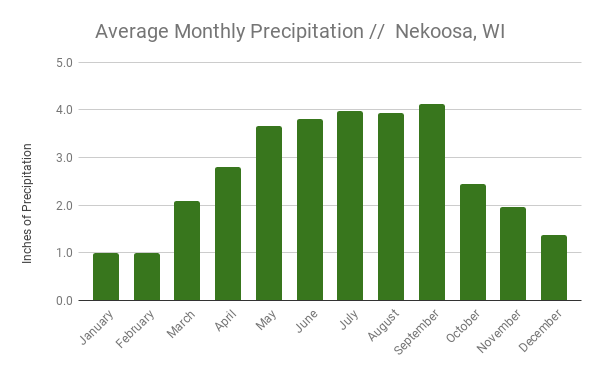 Replay rates are 50% off, and this includes other courses on the property (aka Sand Valley)

Golf carts are only available to those with a permanent disability that prevents them from walking the course. A doctor’s note is required and you should call ahead – 888.651.5539 – to book.

Pull carts are available for $10 a day.

Clubs are available to rent for $60 a day and include two sleeves of golf balls. Mammoth Dunes recommends you reserve clubs in advance.

Mammoth Dunes’ practice area is a short shuttle bus away from the course. There is a driving range, short game area, two practice greens and green-side bunkers.

Other Things To Know

Want to Ace Your Next Golf Trip?

Sign up for our newsletter and be the first to know about course promotions, lodging discounts, and flight deals, plus get travel and course advice delivered straight to your inbox!