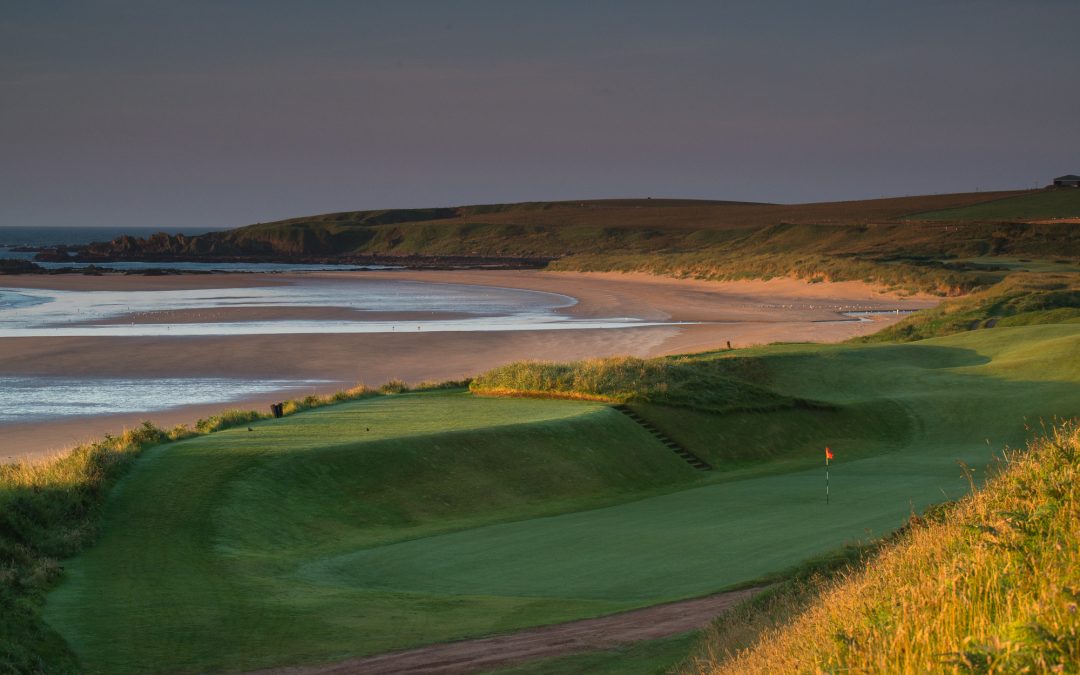 A few minutes ago — right before I started this review —I walked over to my local grocery store wearing my Cruden Bay Golf Club hat.

While there, a man approached me and started gushing about Cruden Bay. Turned out he played the course nearly 20 years ago and was thrilled to come across somebody else who had been there.  Portland, Oregon, where this interaction happened, is 4,500 miles from Scotland.

What about Cruden Bay drives two strangers to excitedly share notes about favorite holes, favorite vistas and favorite dunes while in the cereal aisle?

I’ll be up front: I shared this stranger’s passion for Cruden Bay. The course is magic, and I fully expect I’ll be the weirdo raving it about it to strangers in grocery stores decades in the future.

I have some theories.

If you’ve made it to Cruden Bay, you’ve undergone a journey.

The tiny town of Cruden Bay itself is not near much either, unless you count other small villages and farm animals as “much”. As you approach on the main road, you’ll find yourself wondering where exactly you are…and if there really is a golf course out here.

Then, suddenly, you’re there. The housing surrounding the parking lot looks normal enough, but seems to register as special yet.

Go, grab your bags and walk towards the clubhouse, going around the side to the pro shop. Beneath you opens up 270 degrees of ocean, wildly undulating dunes, gorse and grass. The view is an amuse bouche of golfing nirvana. I’d share a picture but it won’t come close to doing it justice.

Cruden Bay has a sense of place unlike few other golf course in the world. As soon as you turn that corner and see that view, it’s clear that there is no other place like it.

But lots of courses have great views; there has got to be something more about Cruden Bay.

For me, it’s the sheer quantity of unique golf moments.

Let’s face it — with some minor variations, most golf holes (and courses) are relatively similar. Tee box, fairway, green. Probably some bunkers, likely some trees. Maybe the hole will bend one way or the other. Maybe there is some sort of slope to the land.

Most golf holes are like rock music. You have the same ingredients — guitar, bass, drums, vocals — combined in different ways to produce unique songs, but these songs are all basically variations on the same idea (e.g. rock music). Variety exists from how these components are presented and work together. Same with most golf holes.

If most golf holes are like rock music, then those at Cruden Bay akin to something is like prog rock. You’re usually starting with the same basic elements — guitar, bass, drums vocals — but you’re also adding in all this other stuff, layers of strings, synths, choirs, other weird random things and more. You’re playing with song length and time structures and all these different conceptual ideas. It’s rock music but it’s weird and epic and boundary-crossing.

The first two holes are interesting, but relatively conventional. Both move downhill while skirting a hillside. A wall of gorse on your left, and your ball will want to move right when it’s on the ground.

Things start to get interesting on the third hole; 268 from the white tees. A short par 4 that’s eminently driveable, if you put the ball in the right place. I’m neither a particularly long off the tee or skilled as a driver, and I drove it (humble brag — it was the first time I ever drove a green. Let me have this one, please.)

But being on the green is only a small part of the battle, as I learned when I three putted to bogey the hole.

But back to your drive. You have choices, each with the opportunity to give yourself an advantage and each with the opportunity to ruin your score. Dunes abound, you can play your ball off all sorts of bumps, humps and knoles. The Fried Egg recently went into far more depth on Cruden Bay’s third, and with far more expertise than I possess but know this: it challenging without being overwhelming, it’s beautiful and it’s fun.

Number four is a par 3, simultaneously one of the most difficult holes I’ve ever played and one of the most scenic. To your left, a stream runs into the North Sea with a small fishing village on the opposite bank. To your right, a dune towers over you. Between you and the green the ground drops away before rising again to a slightly elevated green. Come up short, you’re dead. Go long, you’re dead. 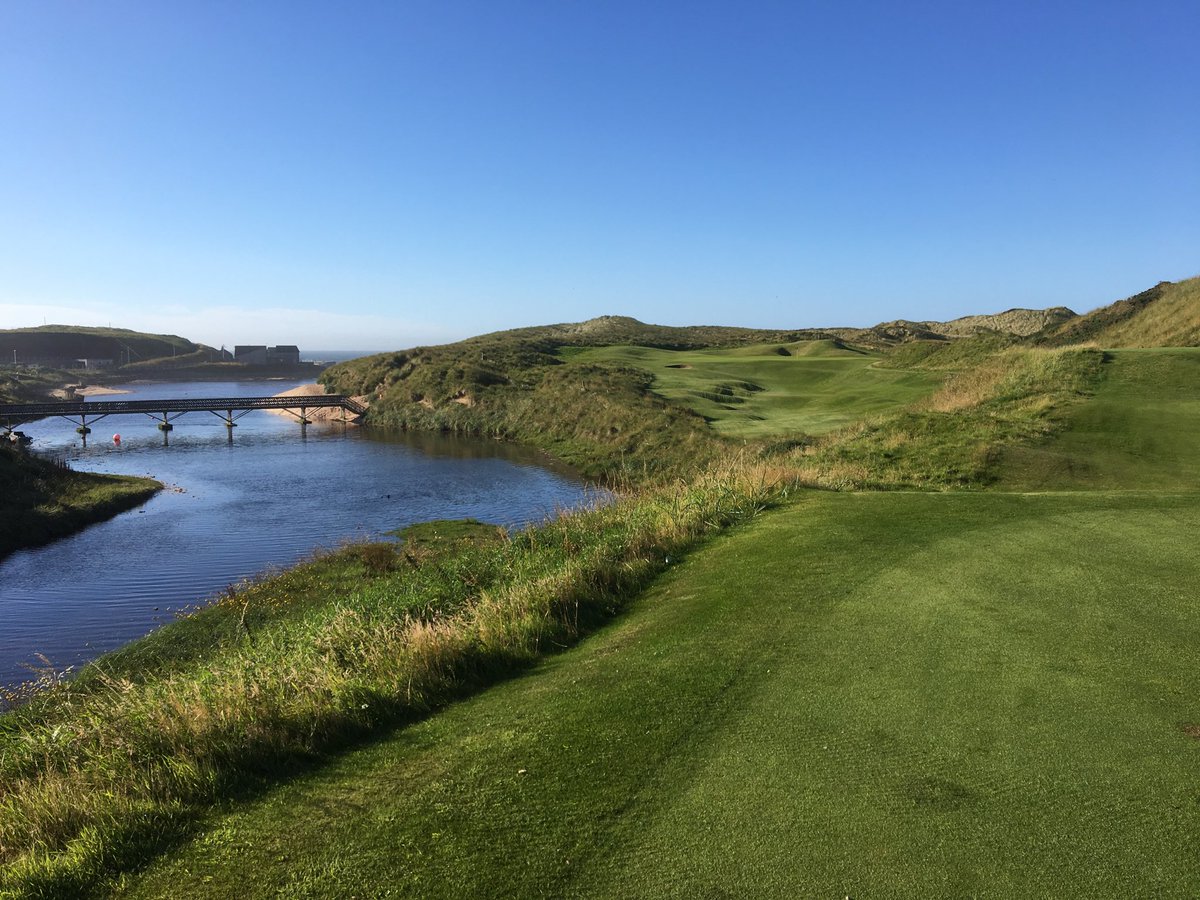 At nearly 200 yards and into a stiff wind, I smoked a three wood that came up short. Death. It rolled backwards away from the green, leaving me with 40 yard dead into the wind to a shallow green that sloped severely from front to back.

I don’t remember what I shot except that it wasn’t good but honestly, I wasn’t even mad. How could you get upset playing golf in a postcard image?

Next come back-to-back par 5s. Number five, the shorter of the two, features you teeing off from the top of a dune to a distance fairway and a wonderful green site encapsulated by yet more dunes.

The fairway at number six veers right for most of its length before taking an abrupt sharp left, crossing over a burn, and then rising to an elevated green. Don’t be short, or you’re rolling back a ways. Almost everybody is hitting a wedge into this green. 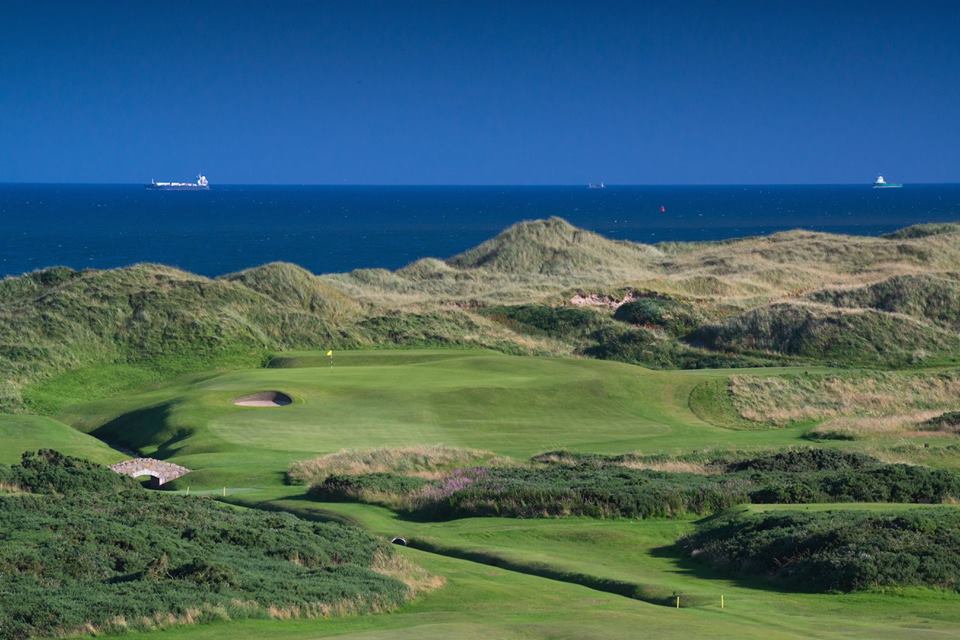 Next is seven, a long par 4 featuring a tee shot to a wide-open fairway. But your approach is semi-blind and uphill over a rapidly narrowing fairway to a green surrounded by dunes; you feel like you’re running a gauntlet of sand hills. It’s nowhere-else holes like this that make Cruden Bay so interesting.

Eight is yet another completely unique hole. It’s a 250 yard par 4 — I wonder if it was a longer par 3 at one point. On the tee, you feel like you’re standing in centerfield of a major league baseball stadium, with the green at home plate. Instead of horseshoe-shaped stands and screaming fans rising above and surrounding home plate, an amphitheater of tall dunes rise and tower over you that look much the same (minus the screaming fans). It’s not a particularly hard hole but it presents a visual unique.

And then to get to the ninth tee, you climb, and climb and climb. You turn a corner and climb so more. Once you’re convinced you’re has high as you can go and your legs are burning and your breath is short, you turn another corner and then climb a good bit further. Then you climb a little even more and finally you’re on the tee box.

I was a Division 1 distance runner in college and I was gassed from the climb. My poor father, I thought I was going to lose him.

But the view is absolutely worth it — what feels like half the Scottish coast and all of the North Sea stretches out to the horizon below you, along with some very tiny golfers on the holes you just played.

Nine is actually a rather conventional hole, at least compared to what came before. Just avoid going left (your ball will tumble off the dunes to the holes far below) and you’ll be fine.

And then with 10, you’re hitting back off the dunes to a wide-open fairway lined by a drainage ditch to the right.

Eleven is a mid-length par 3 that belies it’s tough, heaving green from the tee. Twelve is a short, straightaway par 4 with a claustrophobic tee short thanks to abundant gorse lining both sides of the fairway. And thirteen is a par five that stretches on forever (note: it may not have actually been forever, but it was into the wind and I wasn’t playing well at this point, so it might as well have been forever), with a curvaceous burn to be crossed mid-way and an elevated green that falls off sharply to the right. 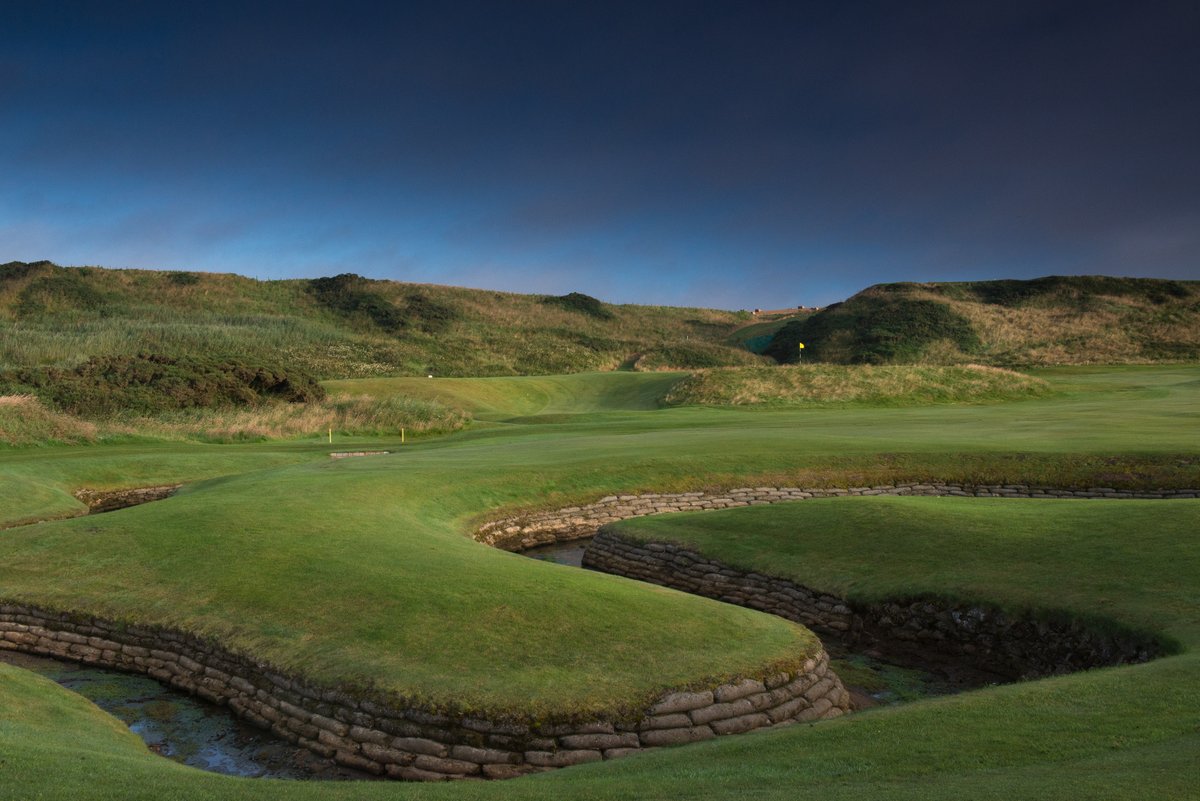 On a course full of unique holes, fourteen probably takes the cake. Off the tee you’re hitting blind towards the massive dune you climbed for number nine. You have to most-or-less take it as an article of faith that a well-struck shot will find the doglegging fairway. Assuming you are indeed in the fairway, you’re looking at a baffling approach shot. To your left, a dune rises sharply and towers above you. Ahead, the ground rises, with no green in sight. To your right, the North Sea. You’re so exposed that you’re often hitting off a fair amount of sand, even on the fairway.

As you approach the green, you’ll see the fairway rise, plateau, and then fall away. The green itself has been called a bathtub, and really, there’s probably not a better way to describe it. Short, left and right the ground rises several feet (or more, in places) around the green. Getting your ball close to the pin feels more like pinball than golf. The best play is probably to land your ball short, let the sandy soil take some steam off of it and let it release onto the green. There’s not another hole like this, anywhere.  It wasn’t gimmicky, not to me. It was challenging and unique and forced me to think while admiring the creativity and audaciousness of it all. 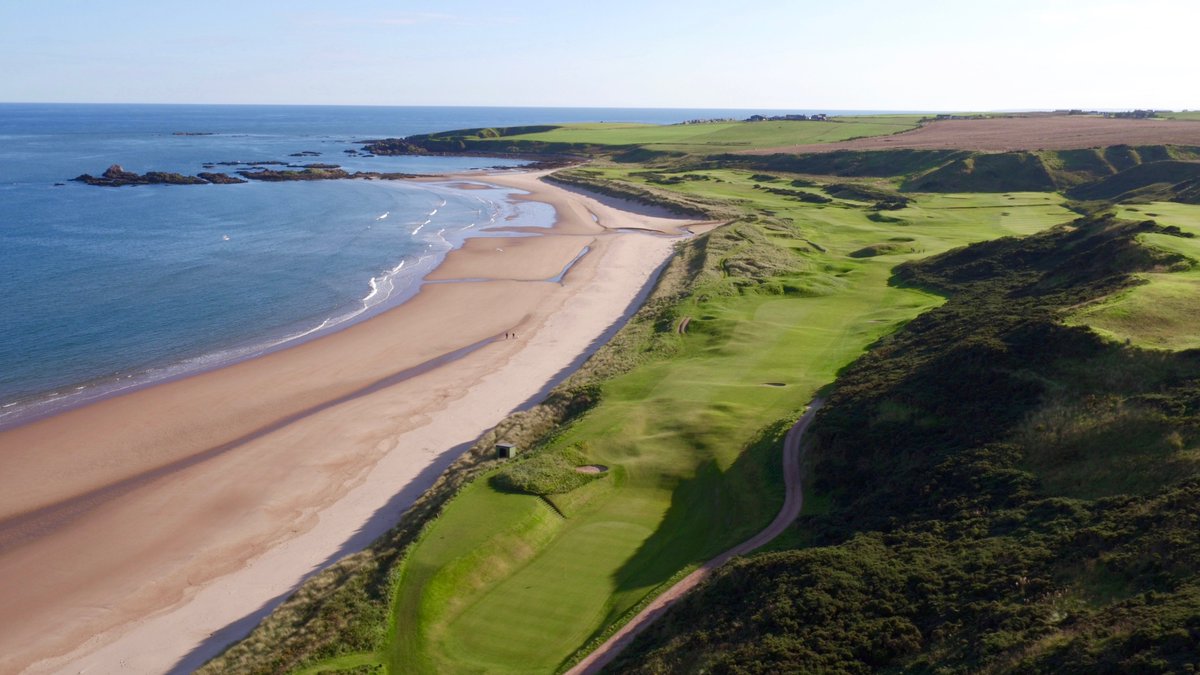 And Cruden Bay doesn’t let up, not yet. Fifteen is a long, blind par 3. The left half of your vision is filled with that same imposing dune. The right is filled with tall grass, sand and ocean. You want to skirt the dune, carrying it over the rightmost edge. Walking up to the green to see where your ball ended up after (what felt like) a solid tee shot is one of those great joys of golf.

You’re almost home now. The next three holes are often described as anti-climatic and even a let down. I disagree. They’re more conventional and less interesting than what came before, but then pretty much anything would be.

Sixteen is another par 3, this time a bit more straightforward. Seventeen features a proverbial elephant buried in the fairway; the massive hump that blocks your view and forces you to choose, right or left. Eighteen is the exhale as you pull back into the station after the roller coaster ride has come to an end. 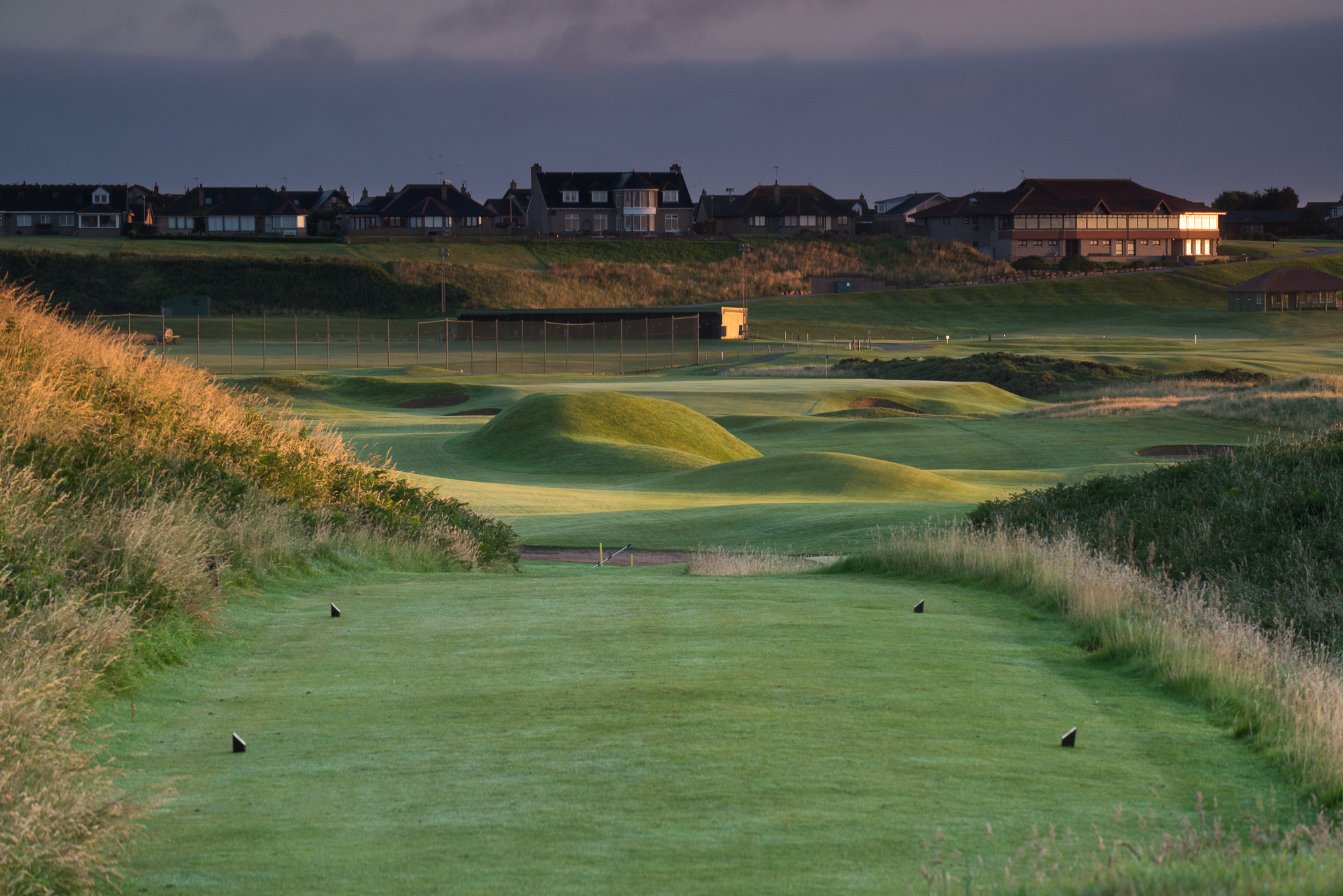 Back to my original question:  What about Cruden Bay makes somebody want to write two thousand words about it?

Partly I think it’s the fact you can write two thousand words about it and feel come away feeling like you’ve glossed over the whole experience. There are courses that I genuinely love and I think are great courses that I would heartily recommend that I can’t write two paragraphs on.

Cruden Bay has so much going on, so much that’s interesting and weird and different and fun that you feel compelled to talk about it, at length, and with great excitement.

This uniqueness and variety inspires passionate accolades. It’s almost cartoonish in how exaggerated the challenge is at times, but it’s not gimmicky. At least it wasn’t to me. Maybe if you’re paradigm of golf is straightaway holes lined by trees and a couple of bunkers.

For me, Cruden Bay strikes a balance between challenge and fun. When it doubt, it opts for fun. But really, it’s just plain a great golf course that’s unlike almost every other great golf course.