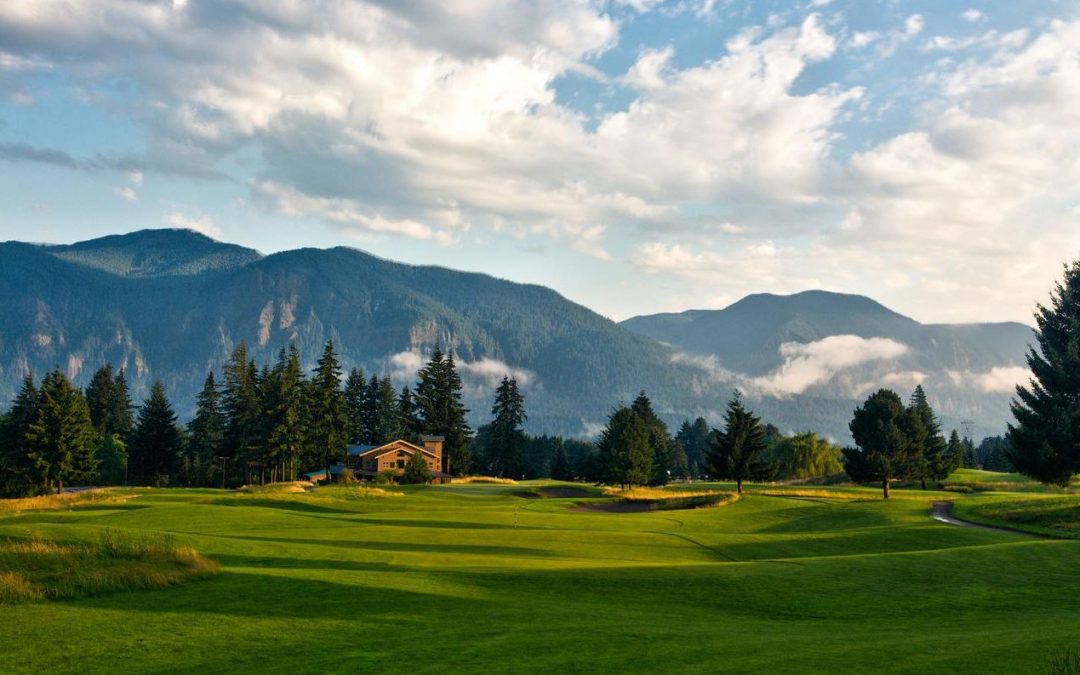 We all have our own “hidden gem” courses we love, and will advocate for to the end. This is the story of mine.

Elk Ridge Golf Course is in tiny village of Carson, WA, about an hour from Portland. The course is about 30 years old and wasn’t really designed so much as evolved as a succession of owners made their marks. It’s currently operated by the friendly people of Carson Hot Springs Resort, and they’ve put in the TLC to make the course something special.

It’s not expensive; I think the most you could ever pay to get on is about $50. It certainly doesn’t get much press. A quick look at the routing reveals a short course in a tight space. A lot of the par 4s are the same length and they all seem to run side-by-side.

But then you step foot on the course and you realize this is a ridiculously fun course in a jaw-droopingly beautiful place.

It’s a mostly open, links-style course. It doesn’t get a ton of play, so it’s usually in great shape. It’s built on sand, so it drains well and is playable year-round – important (and rare) for the Pacific Northwest.

All those similarly-lengthed par fours run up or down rolling hills, and they play significantly different in length. Elk Ridge is located in the Columbia Gorge – the windsurfing capital of the world – so wind is a major factor in how long (or short) they play as well.

The course isn’t a pushover but it won’t kill you. I can imagine a scratch golfer could be less than engaged by the course (but certainly not with the views). On almost every hole, you have a chance to recover from whatever trouble you my find off the tee. The greens provide biggest challenge – they’re massively undulating and quick. Put yourself in the wrong place and you’ll be lucky to walk away with a three-putt. I don’t think I’ve played a round without four putting at least once (admittedly, this is also indicative of my putting recently).

This is a course built for scrambling and creativity. Obviously, playing from the fairway –and the right spot in the fairway – is preferable, but if you miss, you can unleash your inner Seve and have some fun.

But what makes Elk Ridge such a special course is its location in one of the most spectacular places in the world. The Columbia River Gorge, if you’ve never been, is an eighty mile long canyon formed by the mighty Columbia River as it flows through the Cascades. Throughout the gorge, countless streams tumble off the mountains that soar thousands of feet above. All 11,000 feet of the majestic Mt Hood towers over you.

It’s a majestic, awe-inspiring place the equal of any other in the world. And it’s just a fantastic place to play golf.

The front nine mostly winds around the flat exterior of the property and the back nine climbs and falls and climbs again over the hillier interior. You can put a OB on a few holes on the front, or dunk in a pond if you really screw the pooch. Several of the greens on the front nine have helped me refine my cursing abilities; they’re fast and those undulations are something else.

The hilly back nine is the most fun. 10-12 and 16-18 all tumble down, or climb significant slopes. You’r never hitting into an abyss, or up a mountain, but the elevation change keeps things interesting. A few times it almost reminds me of the hillier moments at Chambers Bay.

While I’d say Elk Ridge lacks signature holes, it also has no weak spots. There certainly are memorable moments. The tight par 5 9th, which tumbles down an undulating hill to a green guarded by a pond, is pretty fantastic. It would make an even-better 18th hole, but that’s a minor quibble. And the long par 3 13th plays to a green perched on a knoll, where the land drops away on two sides and it looks like you’re hitting to the cliffs on the far side of the river, thousands of yards away. It never fails to take my breath away.

For whatever reason, I don’t think Elk Ridge photographs well. Pictures just don’t capture the scale of the views, or the lays of mist that envelop the distance peaks. It’s a special place, and its one you have to visit to appreciate.

Is Elk Ridge the best course in the area? Undoubtedly not. Others are clearly “better” with more variety and more challenge. But if I was playing my last round on earth, Elk Ridge just might be where I’d want to play. You should check it out if you’re in the area.